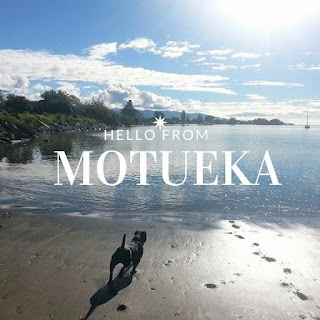 Trust that EVERYONE is having
a great break.
Keep warm.
Posted by Chris Herrick at 10:40 am No comments: 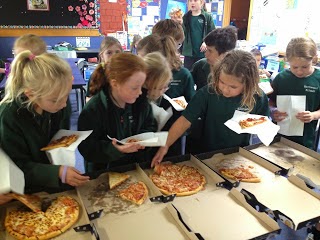 Congratulation to the students in Harakeke
who won the competition to design a poster
to remind other students to show respect at assembly.

Well done and I hope you enjoyed the pizzas.

Posted by Chris Herrick at 12:23 pm No comments: 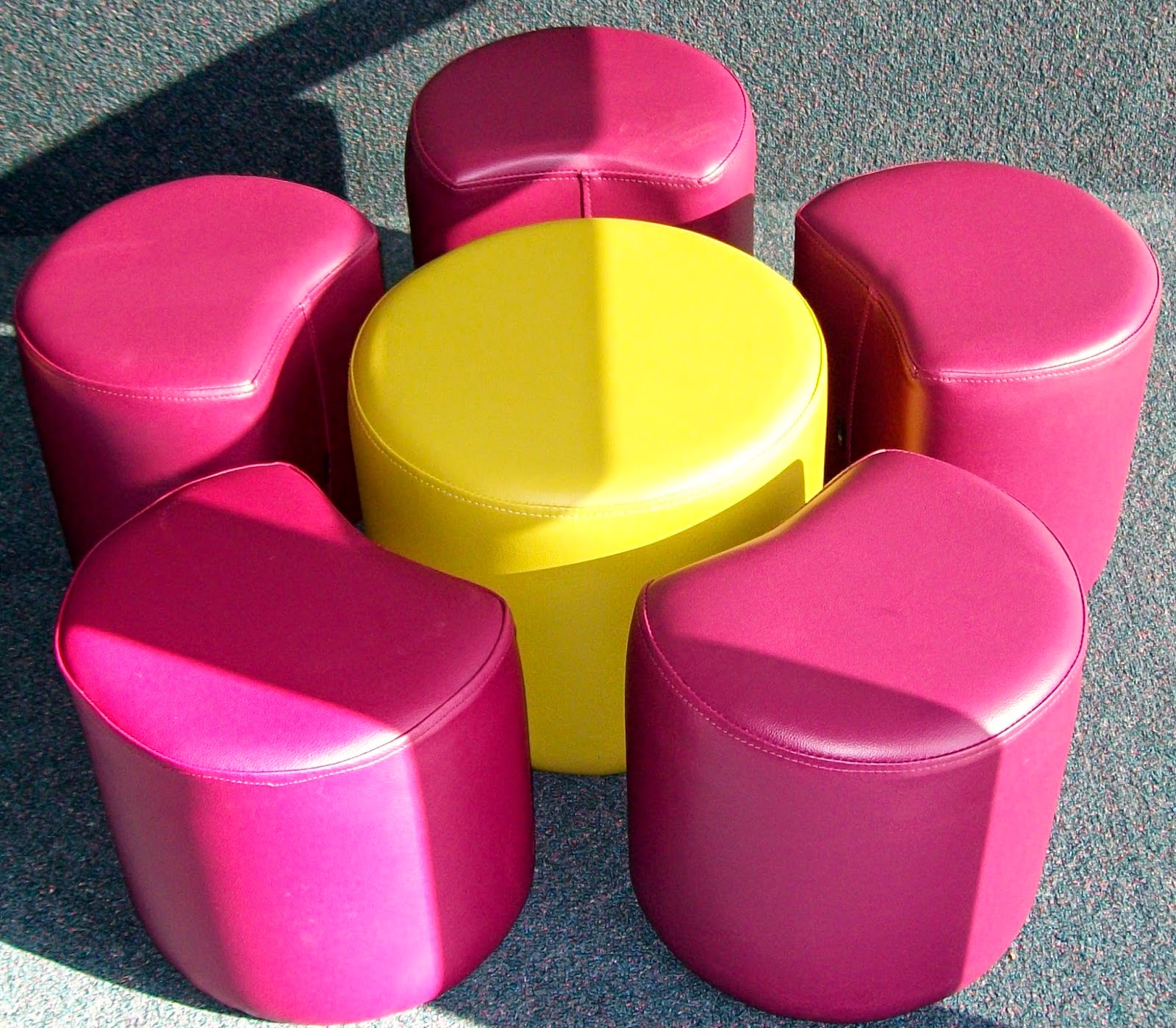 In the holidays I bought a 'flower' for the school. It was delivered last week. I was a bit disappointed because it is quite small.

It was much BIGGER in the photo I thought.

Can you find the flower?
Where is it and what do YOU think of it?
Posted by Chris Herrick at 2:33 pm 19 comments:

Congratulations to
Max and Zena
who are our new School Leaders 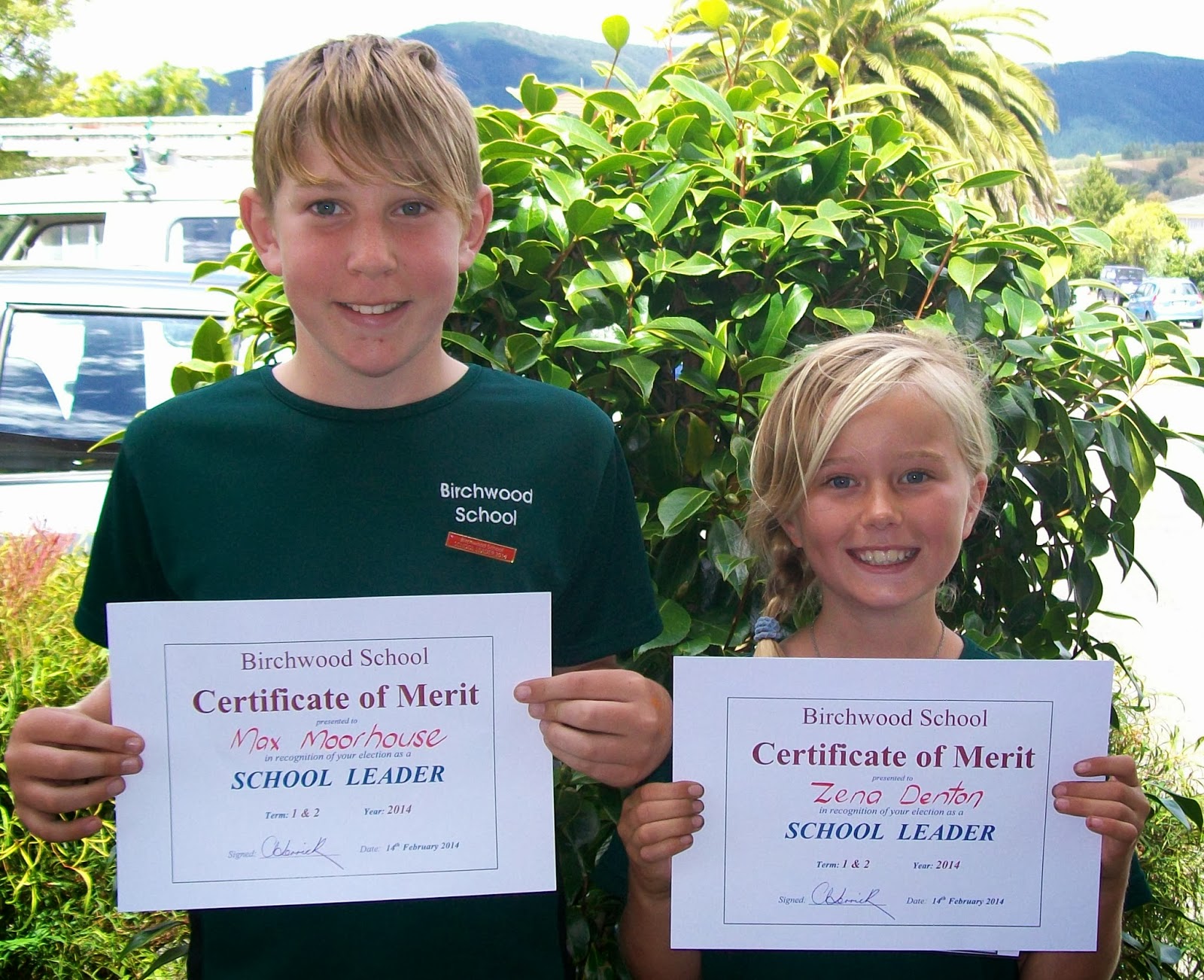 Last week we had an election at school
and Max and Zena were elected by our students.

My visit to schools in Wellington

In Term One, a group of principals from Nelson schools
visited Wellington to look at some schools.
This was an opportunity for us to see things that other schools did
and get lots of NEW ideas. 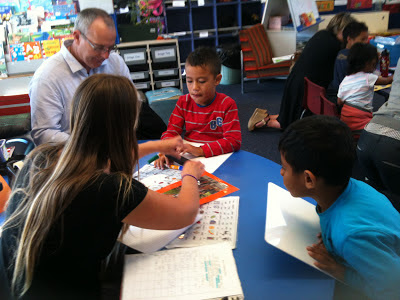 The first school we visited was
Canons Creek School in Porirua.
This was a really exciting school
and the children were really friendly.
We had a walk in the playground and all
of the children talked to us.
They asked use who we were and where we came from.

I was very interested in their reading programme.
The teacher only worked with 2 or 3 children at a time.
This meant they got  really personalised help
and they were really involved.
This programme reminded me of what Ms Tennett does in our Reading Recovery Programme. 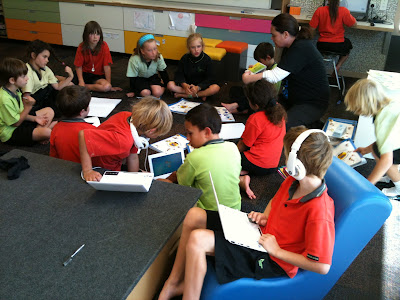 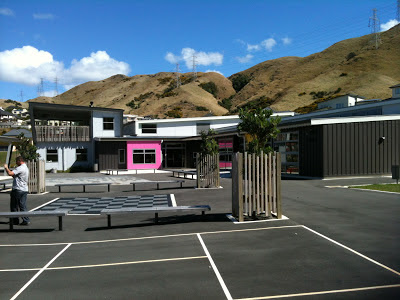 The next school was Amesbury School in Johnsonville.
This was a really NEW school and had only been open
a very short time.

This school was built in an area like a big volcanic crater with houses on the hills all around.
The kids had lots and lots of really cool furniture to sit on, like lots of bean bags and soft moulded seats
like the one in the photo above.
Even the staffroom had bean bags - lucky teachers I thought!!
They also made really effective (good) use of technology
in all the classes. 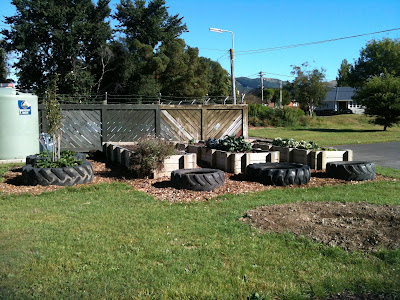 At Naenae School they were really proud of their
EDIBLE GARDENS.
They also showed us their HUGE worm farm.
They are an ENVIRO-SCHOOL.

At Birchwood YOU can join the ENVIRO-TEAM.
Just go and talk to Miss Driver...... 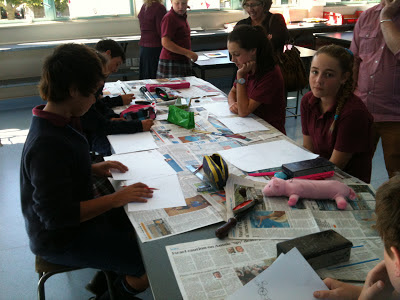 The last school we visited was
HUTT INTERMEDIATE
in Lower Hutt.

They had lots of special rooms where they did special subjects.
In the photo above you can see students in the art room.
They were doing pencils sketches and they were AMAZING.

Speaking of AMAZING, they had also done 3D pictures
as part of a study on disasters.
This picture shows the Wahine Disaster which happened in Wellington harbour.
Really cool picture I thought..... 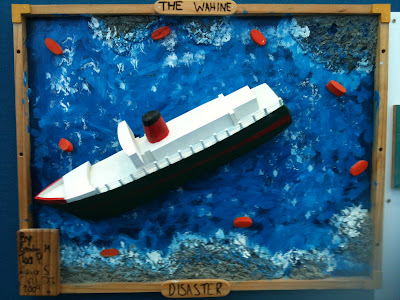 A lot of the things we saw were the
SAME
as at Birchwood School.

Many of the schools we visited had
RESPECT
as one of their values, just like Birchwood....
These were three posters at Hutt Intermediate. 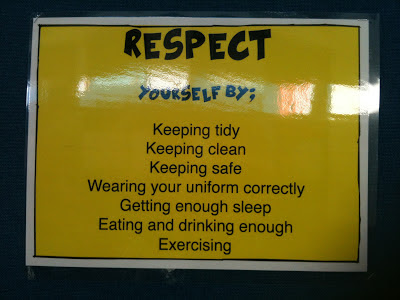 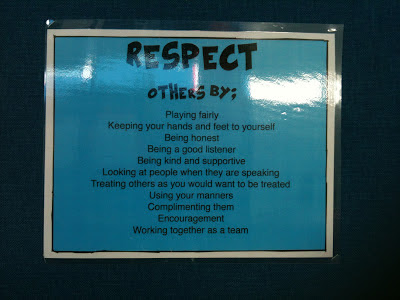 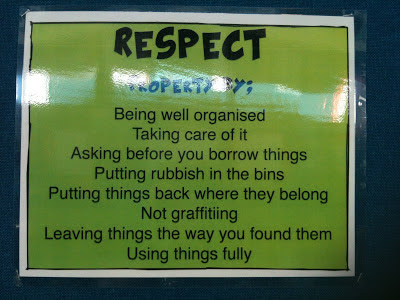 What can you see in these posters that is the
SAME
as at Birchwood?

Do we do many of the same things that they do at
Hutt Intermediate?

I WONDER if we need to make some posters like this?

WHAT do YOU think?

NOW....
Where do you think these photos are from? 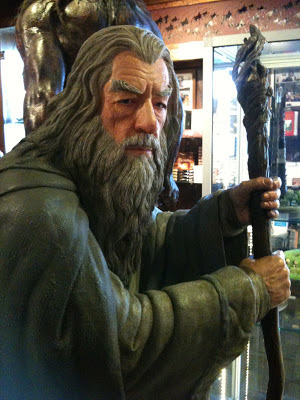 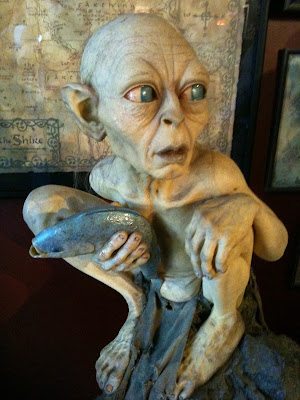 Anyone who thought they were from the
WETA WORKSHOPS
is right!

This was an AWESOME visit where we were taken on a tour.
The tour took us right through the workshops where they make heaps of props for movies.
This is where they made the props for The Lord of the Rings and many others.

If YOU have a holiday in Wellington.
YOU have just got to ask your parents to take you to the Weta Workshops....
they are AWESOME....

Just before flying home....
we had lunch at the Chocolate Fish Cafe.

Most of the principals had a hot fish sandwich.... (not chocolate)
which was delicious.

We even had a treat, one of the principals bought everyone a
CHOCOLATE FISH
to eat on the way to the airport.
Yummmmmy

Have YOU seen something coooool at another school?
Why don't you take a photo of it
and bring it back and show me.

are our School Leaders.

Congratulations on being elected. 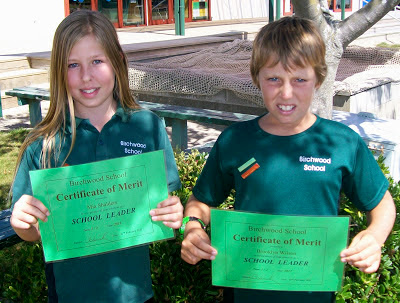 Posted by Chris Herrick at 12:46 pm No comments:

Last Saturday my family went to the

We had an excellent time and the weather was AWESOME!
My son Lance got chosen from the audience to help
CHRIS FORTUNE with a cooking demonstration.

Chris Fortune won 'Hells Kitchen' on television in 2003.
He is now the Executive Chef at two restaurants in Blenheim.
Lance loves cooking so he was a good choice. 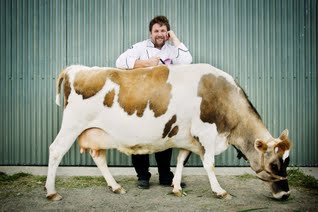 This is a photo of Chris Fortune from his website.
(Chris is the one with 2 legs)

Chris is  confident speaker and presenter and is the current Chairperson of Farmers' Markets New Zealand and the Marlborough Farmers' Market.
He has run extensive workshops and training  programs for market organisers, stalholders as well as cooking classes - public speaking -  demonstrations  -  product launches through out NZ.
One of the hardest positions that I have held over the years is that of full time father and husband to my wife Tina and two children, Kacey Lewis Fortune and Holly Nancy Fortune. 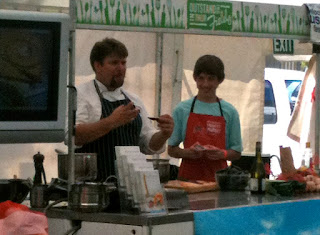 This is Lance (in the red apron).
He really enjoyed this experience.

Chris Fortune also does cooking demonstrations in schools.
He likes to make use of local produce, often from the garden in the school. 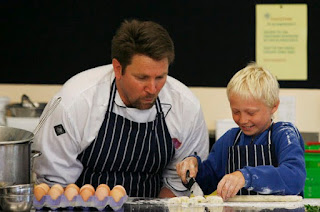 This is a photo of Chris Fortune at Fairhall School, they were making
Potato Gnocchi!

I wonder if Chris would do a cooking demonstration at Birchwood School?

We would have to sort out our EDIBLE GARDEN first - any volunteers?

I love to get feedback on what I put on my blog and I appreciate you taking the time to look at my blog and comment on what you see. Please note that all comments are moderated before being published. Please remember to post your first name after your comment. Anonymous comments may not be published.

Chris Herrick
Birchwood School, Stoke - Nelson, New Zealand
I am proud to be the principal of Birchwood School in Stoke, Nelson. I am the 'lead learner' at our school. I am married to Marian and we have two wonderful boys. Timothy is 12 and attends Motueka South School and Lance is 16 and attends Motueka High School. We live in Motueka and I travel to Stoke each day, which only takes me about half an hour. Our family has two pets, Cosmo is our dog and he is a beardie/huntaway cross and Shay is our cat. Both of our pets came with us from mid-Canterbury and are loving the climate in Nelson.